By now you’ve probably read or heard about a thousand predictions for the digital marketing landscape in 2015. With that in mind, and the fact that most New Year’s resolutions don’t make it more than a couple months, we’ve put together a social media need-to-know and agenda for the next 90 days to help you prioritize amidst the dauntless 2015 themes and to-dos.

On Jan. 1, Pinterest began rolling out Promoted Pins to all U.S.-based partners. Eight months previous, a select group of brand advertisers was chosen to begin using the Promoted Pins beta. The results did not seem to indicate any substantial increase in success compared to organic posts.

While paid advertising could eventually become more of a standard on Pinterest, similar to Facebook where it is becoming more difficult to be seen without paid support, Promoted Pins does not yet seem to be worth your paid media budget. Instead, continue to use the high-performing organic pins to connect to your audience. This is a channel where it can pay to invest in engaging, quality content. Remember: Many users interact with Pinterest by searching within categories, so think carefully about the SEO value of your descriptions.

NOTE: If Pinterest does crack the code on “intent data,” which could allow advertisers to target users based on previous search history and intentions, paid advertising could be a real win for users of the platform.

2. Facebook: Incorporate Video Into Your Posts, and Continue Paying to Play

Users are seeing 360 percent more video in their news feeds these days. If you have the content, now’s the time to host your videos directly to Facebook. The upside? Videos auto-play in the news feed, which can mean more eyeballs on your content. The catch? Videos auto-play on mute, so as not to completely upset and interrupt Facebook users scrolling through news feeds. This means videos must not only fight the ever-dwindling attention span of an average user, but must also be immediately visually engaging. Consider the main message you’re trying to get across and make sure it’s iterated in the first few moments of the video and reiterated in the accompanying text, so your muted users have some context. 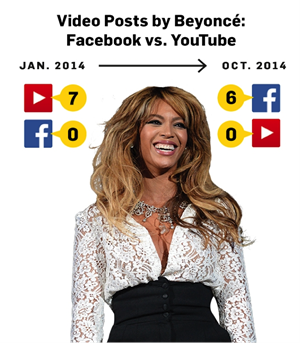 (Budweiser, McDonald’s and even Beyoncé have shifted to posting videos directly to Facebook—not just sharing YouTube links. This change results in less links to YouTube in Facebook feeds and more auto-play Facebook-hosted videos. This is a real shift in how things functioned last year.)

If you haven’t already, take a look at allocating some of your advertising budget for Facebook. But before you invest the dollars, make sure it’s the right platform for your audience and that you have the content to maintain a quality communications strategy. While many marketers would like to be done with Facebook, it’s clear the platform still has a large influence over users and drives significant traffic to websites. Thus, if you plan to invest time and energy into your Facebook communications, it’s wise to put some dollars behind promoting popular posts and driving engagement and/or conversions back to your site.

On Jan. 27, Twitter unveiled its own native product with a video from Neil Patrick Harris about the Oscars. The application will be released widely to the public in the coming weeks. Videos are previewed with a thumbnail and play with just one tap. With auto-play ads hitting heavily with Facebook, Twitter will most likely attempt to increase revenues with a similar feature in future months.

If you are already advertising with Twitter or considering advertising, keep this in mind, Twitter’s own research shows that the most effective ads are those that contain visuals, videos, or fewer than 100 characters. To make the most of your spend, set specific and narrow targets. The good part is that with Twitter’s objective-based pricing, you’ll only pay for desired engagements.

In fact, digital video will probably only see more media dollars invested by brands, publishers and agencies this year. Consider if this technology suits your audience, what kind of content needs can be addressed, and finally what you or your team/company/product has to do to begin rolling out, and/or advertising with videos on YouTube.

5. Snapchat: Keep Your Eyes on It

Snapchat just rolled out a new Discover feature that distributes content from major publishers, such as CNN, ESPN, National Geographic and more. Although it’s unclear how the typically “younger” audience will interact with or even care about this feature, it’s obvious that Snapchat is attempting to provide ways for brands/companies and products to connect with its users. Keep an eye on new advances and be ready to join the fray if and/or when the timing seems right.

Over the next 90 days, watch what others are doing, look for ways to get involved and find new methods of connecting to your audience quickly and visually. Know that if you want to make an impact on social, you’ll probably need to pay up, but that in the end, if the content doesn’t have something useful, entertaining or impactful to say, then your money will be wasted.