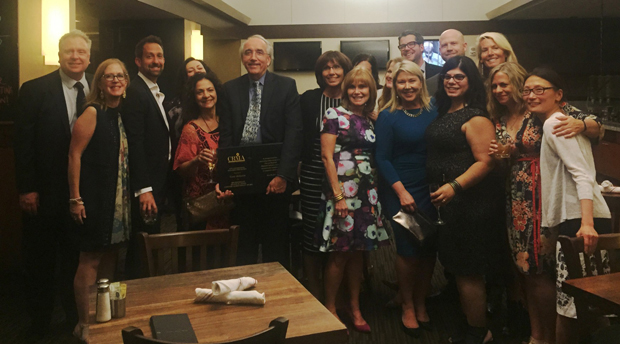 We’re proud to announce that our president, Gary Johnson, is the recipient of the 2016 RR Donnelley Milton W. Jones Lifetime Achievement Award from the City and Regional Magazine Association (CRMA).

Since its inception in 1978, the City and Regional Magazine Association has recognized leading members of the industry who have made a significant contribution to both the industry and the association.

“I’m proud to say I knew Milt Jones and I’m so honored to receive an award named after such an iconic and influential player in the magazine business,” Johnson said after receiving the award. Johnson joined Mpls.St.Paul Magazine in 1977 and has been instrumental in its growth and development as one of the leading innovators in the city magazine industry.

Johnson also oversaw the creation and start-up execution of Twin Cities Business, one of the most awarded regional business magazines in the nation, in 1993. Additionally, MSP Communications has been a pioneer in the custom publishing business since 1978; in the years since, the company has established a digital content creation division that has produced more than 200 digital and print titles for some of the most recognized brands in the world.

“Our branded content creation division, MSPC, has grown and adapted to the evolving digital marketing landscape to become one of the most recognized content marketing agencies in the nation,” Johnson said. “Our uniqueness is in our skill sets, methods, experience and legacy as a journalism-based, data-driven content creation company.”

He laid out five key takeaways from a career spanning the past four decades: