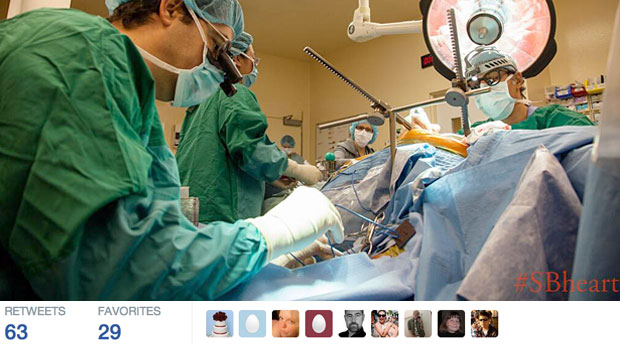 Live tweeting from an event can be a very effective content marketing technique–especially when it’s life or death.

I’ve found live tweeting from an event to be an effective content marketing technique. In real time, my short blasts of important takeaways from keynote addresses, panel discussions or educational sessions get retweeted by other attendees and by followers interested in topics I’m covering. Over time, live tweeting enhances my reputation and the reputation of the health care organization I’m representing as credible, knowledgeable sources of valuable and useful information for a specific audience.

What’s the worst that can happen? The speaker’s PowerPoint presentation hits a snag? A tweet goes live with a typo? Wi-Fi stops working and you need to tweet from your smartphone rather than your laptop? You are tossed out of an event because no press is allowed? Not life or death.

But what if what you’re covering is life or death?

Last month, Sunnybrook Health Sciences Centre in Toronto (that’s why Centre is spelled funny) live tweeted heart bypass surgery on a 57-year-old male patient named Lou. The hospital and lead surgeon Gideon Cohen, M.D., did so to “… raise awareness about heart disease and demystify what happens in the operating room.” The content package included a video interview with Dr. Cohen, which was tweeted out a day before the Feb. 20 surgery to generate interest in what was going to happen to Lou the next day during his four-hour procedure.

The hospital sent tweets out at every key step in the procedure, including photos from the operating room and links to ancillary patient education videos for those who wanted more information on a particular step. Local and national media retweeted the hospital’s tweets, which is how I caught the story and began following it incision by incision. I admittedly did gag at the photo of the artery the surgeons removed from Lou’s arm to use for two bypass grafts. The social media campaign ended on March 7 with a tweet linking followers to a video interview with a healthier and happier—and most importantly, alive—Lou.

You can review the hospital’s storified version of the live tweets here, or you can look of some of them yourself using #SBheart on Twitter.

I liked what Sunnybrook did for a number of reasons. The Twitter stream was well thought out. There were pre-event, event and post-event tweets, giving followers a complete story to follow. I also liked the links to the ancillary patient education content, which included tips on improving your heart health so you don’t end up like Lou.

Most of all, I liked the high-risk/high-reward mentality of Sunnybrook. Lou could have coded on the table, the surgeon’s knife could have slipped, the power could have gone out, the heart-lung machine could have malfunctioned. But none of those “couldas” happened. The story had a happy ending, and without a doubt, people in Toronto who need heart bypass surgery will think of Sunnybrook because of its transparent approach to patient care.