Putting Some Thought into Thought Leadership 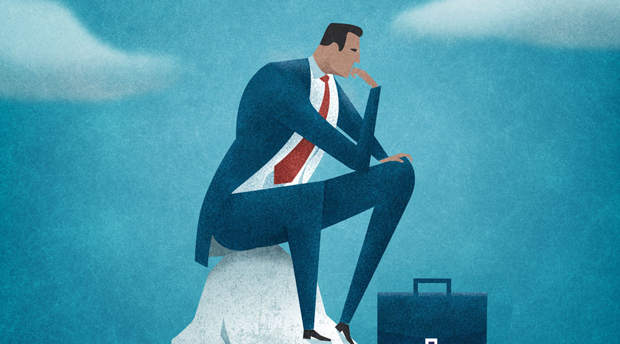 Who doesn’t want to be considered a thought leader in their field? As a go-to thinker on the most pressing issues in their industry? As the person your audience thinks of first when they need crucial insights on matters near and dear to their hearts? When you speak, people lean in and listen.

This will sound simplistic: thought leadership starts with having something to say and the willingness to say it. It is simple. However, not every person—or organization—who wants to be a thought leader can pull it off, especially in the B2B content marketing world.

That’s a shame, too, because thought leadership is the backbone that holds effective content marketing together. It’s the new idea that makes people pay attention, whether that idea is distributed in a blog post, video, infographic, social post, white paper, whatever. When they pay attention and the idea is credible, transparent and authentic, the consumers will trust the person and become loyal customers.

So why can’t some executives and organizations make it work? The reasons typically fall into four buckets: ignorance, fear, sales and commitment. Let me give examples of each and then offer some ways around the barriers.

In the first bucket—ignorance—you have executives who really don’t have anything to say about their industry. This would be a CEO who knows how to run a company but doesn’t happen to be a visionary or leader in the company’s field. They know how to build an effective workforce, generate revenue, control expenses, provide great service and comply with all product and financial regulations governing their business. They just as easily could be running a company in another industry. They just don’t know much about the industry they happen to be in at the moment. So why risk it and say something stupid, right?

In the second bucket—fear—executives work for companies that are slaves to their quarterly earnings reports. It’s all about shareholders. No one—from the board chairman to the president and CEO to the security guard at the front desk—is going to be permitted to say anything that even remotely could cause the company’s stock price to drop if only by a penny. It’s best not to say anything. If a new or innovative idea does make it into a first draft of a piece of content, it’s sure to be watered down by an army of job-fearing and stock-optioned directors, vice presidents and senior vice presidents into the equivalent of unflavored Farina.

The third bucket—sales—is related to the second. When the job-fearing and stock-optioned directors, vice presidents and senior vice presidents water down content, many of them try flavoring the Farina with thinly veiled plugs for the company’s products and services to boost sales. What started out as an insight into the future of the industry becomes fear-mongering and a pitch and link for salvation. There are so many commercials now—like many vendor presentations at conferences—posing as thought leadership content that most customers tune it out or stop reading/watching/listening/attending after the first few sentences/seconds/words/slides.

In the fourth bucket—commitment—executives are visionaries or leaders or experts in their company’s field of business. They are not afraid of influencing quarterly earnings reports because they believe what they have to say will grow their industry and their business along with it. They’re not going to resort to disguised sales pitches because they respect their audience. But, these are the people who often are too busy to write down their great thoughts and share them with customers and prospects.

Four Tactics to Escape the Traps

So what’s a content marketer to do? Here are a few suggestions to help you crawl out of the buckets and turn your executive into a thought leader.

For executives who know how to run a business but don’t know much about the industry they’re in, create content about what they do know about: how to run a business. What are their secrets to building an effective management team? What tips do they have for providing great service to customers? Years ago I worked for a health care publisher who acknowledged not knowing much about the inner workings of the health care industry. He wrote a column on things he knew a lot about: leadership, sales, manners and dogs. Readers loved it, and ad sales showed it.

For executives in the second bucket, the thought-leadership safe zone is bordered by honesty, accuracy, credibility and consistency. Thought-leadership content that stays within those four walls should boost quarterly earnings, not drive them below analysts’ expectations. One example might be a year-ahead forecast on industry challenges supported by empirical evidence and independent market research that acknowledges and comments on the previous year’s forecast.

As I write this, Mark Bertolini, chairman and CEO of Aetna, is taking some heat for flip-flopping on whether the health insurance giant would grow or shrink the number of health plans it sells on state health insurance exchanges created by the Affordable Care Act. Earlier this year, his answer appeared to be “grow,” but in mid-August, the answer turned out to be “shrink.” I’ve met and interviewed Bertolini several times and have gone to his presentations at industry conferences. I do think he’s a thought leader on using health information technology, digital health technology, mobile devices and data to pull the health insurance industry into the 21st century. But by appearing inconsistent with his message on Aetna’s exchange participation, he’s gone from visionary to insurance salesman in a blink of an eye.

Avoiding the third bucket can be tricky. Let’s not pretend B2B thought leadership isn’t about sales. It’s all about sales. It just takes a circuitous route to get there. Convincing job-fearing and stock-optioned directors, vice presidents and senior vice presidents that taking the long way will produce better sales results than taking the shortcut can be tough, particularly at a company where quarterly earnings reports are everything. The answer to this challenge is data—data that show that authentic thought-leadership content outperforms thinly veiled sales pitches measured by audience engagement and ultimately sales. The volume of research on this grows all the time with the needle pointing consistently in the direction of authentic thought-leadership content. A recent study by Nielsen, for example, found that branded content produced better brand recall than pre-roll video advertising.

That brings us to the fourth and final bucket of trouble, commitment. Your CEO is a visionary or leader or expert but doesn’t have time to commit pen to paper or fingers to keys. The trick here is capturing the CEOs thoughts during the course of his or her normal business day without adding another item to their crowded agenda. Are they giving a keynote address at an industry event? Videotape it. Are they speaking on a quarterly earnings call with shareholders? Record it for a podcast. Did they give a speech at a community event? Publish an edited transcript. Did they give a presentation at a conference? Summarize and post their slides. Opportunities to capture and distribute your CEOs big ideas as thought-leadership content are everywhere if you know where to look.

Don’t give up. Put some thought into it.