Video Journalism and Glimpses of the Future 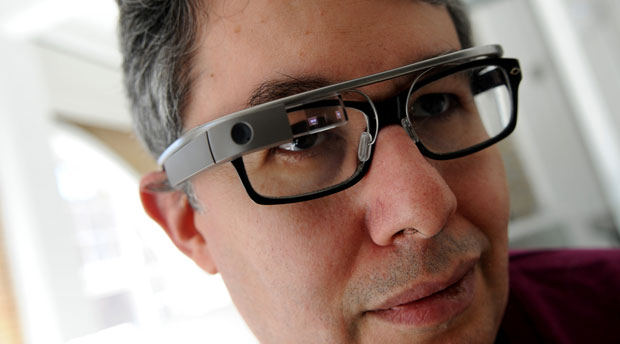 Journalist Julio Ojeda-Zapata is using Google Glass and GoPro cameras to tell stories from unique perspectives. But he says the wearable technology still needs a lot of work.

Newspaper journalists like me, who were once focused almost exclusively on written words, now increasingly wield cameras in the course of our newsgathering.

Reporters at my newspaper, the St. Paul Pioneer Press, recently were issued iPhones to use for video reporting. The paper’s owner, New York City-based Digital First Media, even has embraced the video-sharing service Tout as the official company platform for this.

One reporter at my paper, John Brewer, has been experimenting with camera-equipped drones in big indoor spaces such as downtown St. Paul’s recently revamped Union Depot to assemble eye-popping video sequences.

Recently, when reporting on a story about a creator of electric bicycles aimed at winter cyclists, I attached a GoPro actioncam to my bike helmet so I could capture myself and my subject on St. Paul’s Crosby Farm Regional Park snow trails.

In the edited video I later assembled, a man we come across marvels at the electric bicycle and my helmetcam, exclaiming, “Do we live in the future or what?”

My answer: Not quite, but I can see it from here.

Someday, I will be wearing glasses very much like the fat, black, nerdy frames I currently favor, but with an Internet-connected camera embedded in them. This will be the equivalent of my GoPro, but always available, always at the ready to gather raw material for stories of all kinds.

It’s an exciting prospect. If something newsworthy unexpectedly happens where I happen to be, I won’t waste time fumbling for a smartphone or camcorder. Impromptu video interviews will be a bit less awkward since I won’t be holding up a camera while conducting them, but just looking in the subjects’ direction and making eye contact. I will send live video feeds to my newsroom, and even to the public at large.

A crude precursor to that spectaclecam exists, as many of you know. It is called Google Glass, and it essentially consists of a small computer on your face.

A translucent rectangular prism above the right eye incorporates a teeny screen and is installed onto a metal frame that builds in a battery and touch controller. Google Glass can shoot pictures and video, enable videoconferencing, conduct Google searches, give driving directions, access the Web via a variety of apps, and more.

The latest Glass model can be built onto a range of stylish eyeglass frames, too, in what is a bit like the eyeglasscam of my fantasies. Google Glass is crude — essentially the Model T or Apple II of such devices — and is not even self-sufficient but dependent on a nearby Android phone for many of its capabilities. It’s pricey at $1,500. Its battery life sucks.

Yet Google Glass has been the talk of journalism — at least among nerdier practitioners. Digital First Media journalist Ivan Lajara, documentarian Chris Barrett, journalism professor Jeff Jarvis and foreign correspondent Chris Pool are among those who have experimented with Glass in a journalistic capacity.

It hasn’t always gone well. Barrett developed migraines from his Glass use. Jarvis has recently ranted about how Glass is a waste of money, at least in its current form.

I’ve tried Glass on a number of occasions and felt a mixture of wonder and annoyance about a technology filled with promise but flawed in its current form.

Whenever I start feeling dismissive about Glass, however, I remind myself of reporting I did on Glass users in the Twin Cities – and particularly of Tout-hosted videos I shot of them telling me about their Glass experiences.

Though they have a number of complaints and describe a few unpleasant experiences, they’re generally delighted with Glass and the changes it has made in their lives — how they perceive and interact with the world around them, how they communicate with loved ones, how they go about their work, and more.

The Glass users’ enthusiasm can’t be conveyed properly via these written words. You have to watch. When you do, you’ll catch tantalizing glimpses of the future, as I have.